I gave up. According to early projections, I would have been finished by now. In terms of word count, I'm still technically on course to complete on time, even though I've not written a word for a week. I was a fast writer back in those days.

Something bad happened. Something pretty devastatingly life-changing and personal, and I took some days off from writing the novel, safe in the knowledge that I'd built myself a six-day buffer. And then, when I came back to my computer... I just couldn't do it. More than that, I just didn't want to.

It's probably because I lost momentum, I know. But it also seems a bit stupid now, writing a novel in a month. It's not going to be good, is it? You'll never be proud of the work, beyond the fact that you have done the work, and if you can't be proud of it, I'm struggling to see the point.

It's not hard to imagine that come next November, I'll be desperate to do another NaNoWriMo. But I'm hoping that that will follow a year of having tried to write a novel in normal time and failing, and not because I couldn't be bothered to do any writing in the months of the year that aren't November. (Obviously my hope is that I won't be doing NaNo at all because I'll have successfully written a novel in the forthcoming year, but... baby steps.)

This could all be justification for my quitting, of course, but really if I needed justification, I already had the Bad Thing. I think this was genuinely a good choice. I want to continue the novel (perhaps with a big rewrite of the first 25k words!), and finish it in my own time, and for it to be great. That's what I want.
If you can imagine, by Rhys at 19:24 2 trolls

NaNoWriMo, Day 9: Everything is FINE

I just about got to the halfway point today. I don't as pleased as I hoped I might, to be honest. I feel like the book has slightly lost its magic.Maybe because I'm at that middle third now, book-wise, or maybe because I plotted badly, or I just started too fast out of the blocks and now I'm tired. I think I may give myself a day off if I continue to have bad writing days. I want to find myself hilarious again!!!!

Yesterday, I work travelled, and was out of the house from 6.30am to 11.30pm, so I wasn't able to blog. I was, however, able to write on the trains, so I did complete the word count. I would say that it's probably the worst two thousand words I've written so far. It felt like a bit of a slog and, criminally, I don't think any of it was very funny.

Still, onwards and upwards, as your mum says. Today will almost certainly be better... if I only I weren't so damn TIRED! Pity me. Oh, also, I should be hitting the halfway mark today. Yes!

We're not really in Heaven. It just rhymes with seven. Having said that, I have started getting in to the religious aspects of the novel a bit more today, which will play a bigger and bigger part as the novel progresses. That's fun.

I like talking about religion and people who follow religion; it makes me feel like my first degree wasn't a big fat waste of time. It is quite difficult writing about religion in a way that is both funny and inoffensive, but I suppose the beauty of NNWM is that you don't overthink or talk yourself out of these kinds of things.

I'm now pretty far ahead of schedule (five days), so I should comfortably meet the deadline. In fact, all going well, I am hoping to get something like 60-70k down, and beyond that, I will hopefully keep going until I reach the end of the book (I'm guessing about 80k, but WHO KNOWS?!)

Tomorrow, I'll be travelling for work, for the first time this month. Which means, I'll basically only have the train from Bristol to Didcot and back again to do any writing. Hopefully this will be enough. Blogging may be difficult...

NaNoWriMo, Day 6: In the Mix

Today, I wanted to get loads of words down but yet again I am doing a thing, so writing time has been cut short. Having said that, I have written nearly 3000 words today, so it's not like I've done nothing. It just feels that way for some reason. Today, though, I have been updating the future plot a lot, inspired by the things I've already written. I'm finding it helpful, slightly adjusting my plans as I go along.

UPDATE: Since I wrote that last paragraph, I have done the thing that I was going to do, and am back home, waiting to do the other thing that I am going to do (namely... watching Downton Abbey).

Oh, today, I need to back up what I've done so far. It's Backup Sunday (previously known, of course, Downton Sunday)!

Finally, what you've all been waiting for... yesterday's croquembouche! 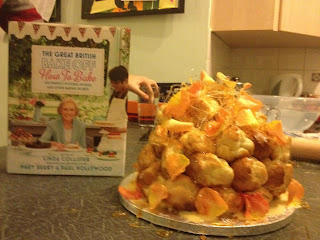 Yes, that's my very own finger in the background, cooling down after a run in with sugar lava. We made it by doing this, this and this: 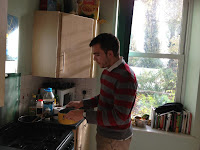 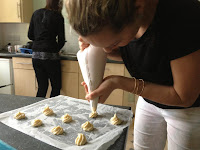 Bit busy today. Wrote some but not loads. Made a croquembouche. Drank mulled things on top of Brandon Hill, looking out over the whole of Bristol, while a million fireworks did explosions. Had friends over for drinks. Got a Magic Roll. Didn't do much writing but I did enough. Feel like I may be slightly delirious with tiredness. More tomorrow.

Last night, we went to a very fancy restaurant, determined to spend lots of money. While we were there, we bumped into a friend of mine and his girlfriend. Suffice it to say, much fun was had by all (in a weird way, we all kind of got excited by theprospect of the other diners thinking we were just two random couples who'd hit it off) and I got drunk on fancy wine.

I also ate some amazing food (see below foodies), but mostly I got drunk. Which meant that today, I did not feel much like doing anything. I went to work, obviously, and I did my work. I even spoke politely to people and nobody even knew! But then came writing time, and it took me a lot longer than usual to get started.

I know a lot of people say that when you're writing, you should never finish a chapter, because then the next day you have to start by opening a chapter, but I don't think I find it any easier to start in the middle of a chapter! Well I did start, eventually, and I got my words done, so I did. Actually, I got at least double the words done. I wonder if they're good. Eh.

I spoke briefly to a friend who's NaNo-ing too today and we both agreed that this year is easier. Maybe it's because of the weather, or our situations in life these days, but I like to think that it's because we're getting better at it. I hope we are. In any case, I have to say, four days in, I'm really enjoying NaNoWriMo this year.

Beetroot (three ways, including salt baked, with goats cheese and an olive crumble). 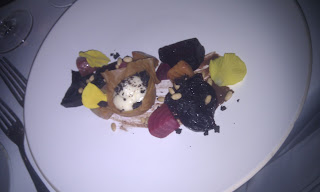 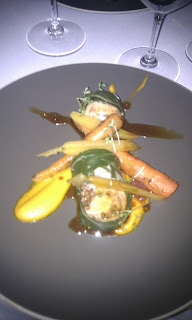 Mushroom and white chocolate gateau (I didn't take a photo because I'd already embarrassed everyone enough but rest assured, it was weird and delicious.)

PS. Last night, I ate more flower petals than I ever had in my whole life combined before last night. If that makes sense.
If you can imagine, by Rhys at 21:51 0 trolls